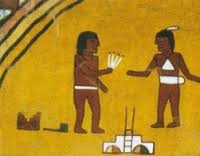 History of Hopi Ear Candles
Hopi Ear Candling is an ancient and natural therapy handed down by many civilisations. It is believed that the Ancient Greeks used ear candles, initially probably for cleansing, purifying and healing on a spiritual basis, but much later on a purely physical basis. However, the practice reached the modern world via the native American Hopi Indians of North Arizona.  Ear candles were used traditionally by Shamen healers.  Ancient wall paintings show their importance in initiation rituals and healing ceremonies of the tribe. The candles are still made today on the basis of the old traditional formula originating from the Hopi Indians.

What are Hopi Ear Candles?
Hopi Ear Candling (also known as Thermal Auricular Therapy) is a pleasant and non-invasive treatment of the ears, it is used to offer real and calming benefits for many problems and conditions associated with the ear, nose and throat areas. The therapy is widely used by doctors in Europe and America as an alternative to conventional treatments such as antibiotics, ear syringing and grommets. A Hopi ear candle treatment is a deeply relaxing, calming and soothing experience.  The treatment can be used to help such ailments as headaches, migraine, sinusitis and rhinitis

How do Hopi Ear Candles work?
The process of Hopi candling involves a specially designed hollow candle being lit & inserted just inside the ear canal, whilst the client is lying down. The candle burns with a small flame, the heat from which produces a mild suction by which debris can be drawn out of the ear. The vapours produced as the candle burns down circulate in the ear canal having anti-inflammatory, analgesic and anti-bacterial properties.  Often referred to as the ‘chimney’ effect.  The rising air gives the ear drum a gentle massage and also helps to regulate ear pressure.  This is soothing, calming and protects the irritated areas.

Most of these are carried away through the candle "chimney", although some of them can be found in the lower section of candle wax after removal from the ear, or could even work their way up to the surface 24-48 hours after.

The mild heat stimulates the blood and lymph circulation which boosts the immune system.  Both ears are always treated to ensure balance is maintained.  After both ears have been treated, clients can receive a relaxing face, ear and head massage (on request).  Reiki can also be given throughout the treatment.